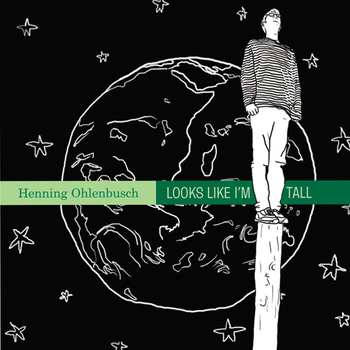 SKU:
$10.00
$10.00
Unavailable
per item
Compact Disc
Buy Now
You wouldn’t necessarily call a friend to come over to hang out with you as you sort, fold, and put away the laundry. Similarly, it’s difficult to read a magazine while you do the dishes. So you slap an album on the CD player. But you’re not looking for “Moondance,” which you know by heart, nor is this the time to put on the new Belle & Sebastian album to decode for the first time - what you need is an old friend who will speak to you as he sings, engaging your mind and heart at the same time. Every time one listens to Henning Ohlenbusch’s "Looks Like I’m Tall," it reveals another shade, it grows a new leaf, it sheds a tear through a sung sigh.

Although gifted with a talented, expressive backing band in School for the Dead (The Chain CD, The New You), Henning set aside this collection of songs to form a solo album in every sense. Over 2005, in his home studio, Henning by his tall lonesome penned lyrics, composed tunes, arranged and then played all instrumentation, devised and crooned harmonies, moved the amps, pressed all the buttons, and took out the trash.

From the sprightly opener “But We Did,” a feast of gurgly synths surfing across a tasty banquet of hooks to the closer, “It’s Now,” which is marked by a sadly lilting recorder line in the intro and a pluvial cascade of plucked strings announcing the pensively sweet chorus, Ohlenbusch broadens his palette with a set of reflective songs set to contemplative moods presented by his solitary muse.

Herein you’ll also find “Held His Gaze,” which is the most fully realized distillation of Paul Simon’s considerable influence upon Ohlenbusch’s writing, but after one or two listens, the tune eases into your consciousness as one of Henning’s own best. The title track and “This Nightly Progression” both express Henning’s mixed feelings about his place in the independent music world.

Lyrics are married to latchkey melodies, then lovingly swaddled in majestic prisms of instrumentation and harmonies. Looks like I’m tall, smells like teen spirit, feel like makin’ love, sounds like we have a winner. And we do. Taste the victory.

Recorded and mixed at Rub Wrongways Studios, Northampton, MA
Mastered by Dan Richardson Up In The Basement